Audi S5 – No need for hashtags

Audi S5 – No need for hashtags

Just the other day I realised, whenever I shared images of any German luxury car on my instagram, my likes jumped up. Last time when I shared an image of an extremely fast Japanese car, boom no one there to like. Speaking to some friends, who use instagram, some suggested that  I used some incorrect filters, some mentioned wrong hashtags. New hashtags that I have learnt and tried implementing #caroftheday, #picoftheday. All fail! Then I changed the filters! Too dull to upload! I downloaded some new app that had some HD filter, which made the image look more paint like than real. It lost its charm, the colour was super saturated and the image was overdone. Trying my luck, I used the filters and some funny hashtags. Boom! There it goes! Almost twice as much likes than my normal likes. 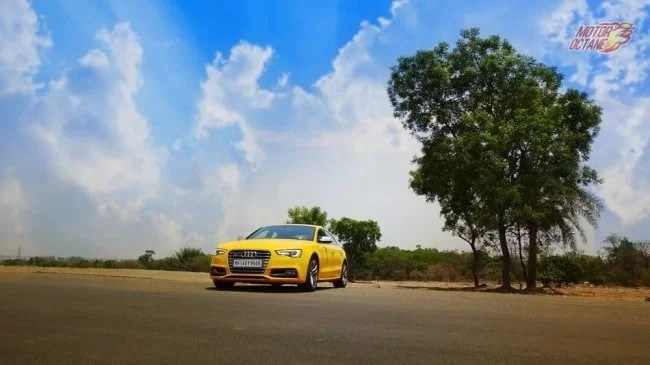 But then there are some cars that don’t need any major hashtags. They were made tin a fashion to get maximum likes on instagram. They don’t come with built-in hashtags! They are designed to even make the harshest critics to gush out the whoosh of wows! Born in a German town Ingolstadt, presenting the Audi S5. To top it up, our S5 came in Speed Yellow colour.The A5 is the genesis of the S5, and even of the RS5. But it doesn’t come as a two door coupe, this has four doors. For India, if something has lesser doors, it better be cheaper than the four door. With two lesser doors, it is certain that the buyer should pay lesser money. It isn’t logical but that is the case. The sloping roof resembles that from the A7 and the rear to resembles the A7. When I got the car home, there were stares and glances. Everyone is aware of my job and are used to the sight of different cars, but the yellow of the S5 caught their attention. Then the matte chrome finish on the ORVMs meld with that brilliant Yellow! Maybe another sign for Audi, get more of these. Whats more, the daily cleaner scrubbed the car as if his own. I have got more expensive cars than these, but they haven’t got such a treatment. Not everything beautiful has to have a very high price tag.

The S5 is based on the A5, which means it doesn’t get the best of the bells and whistles one will want in an Audi. It gets a not-so-large screen with MMI interface and dual zone climate control. Do not expect too many frills, as you really won’t get much time for them. Things worth a mention on the inside are space for four, extended thigh support for front passengers, seat comfort and a large boot. One major downside is the absence of a foot rest, despite an automatic. The quality of materials is good and fit and finish matches the German precision. 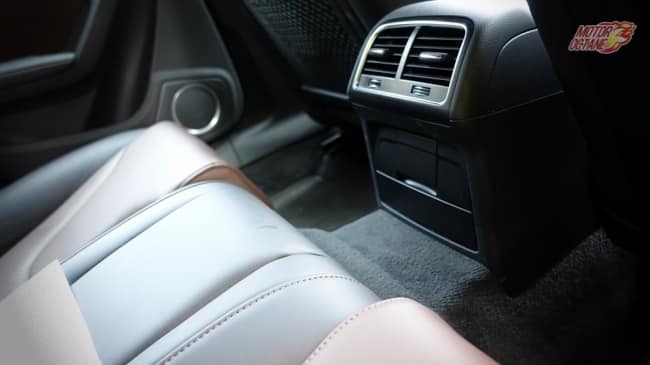 The interiors are good and practical but the other talking point is the engine. This is a 3.0-litre V6 mill that has been turbocharged. With an army of about 330 horses, this V6 engine has a sweet exhaust note. To listen it, you need to lower your windows and to enjoy it, you need to drive in a tunnel. This is generally the note that you listen on most of the Italian sports cars. It is sweet and melodious to your ears. It isn’t loud and distracting. the loud ones can affect you, especially when driving on Indian freeways where you can keep the throttle pressed for a long time. If think the power that a regular Audi A4/A6 produces isn’t sufficient, and the RS version is too powerful then the S variant comes in. Blip the throttle and you are good to overtake. Where the S5 shines is its ride and handling. The ride is pliant and it stiffens in Dynamic mode, but it isn’t harsh. This is still the case even on bad roads. However, you will have to slow down as the underbelly of the S5 scraps even a bit high bump bumps or bad roads, even if one person is travelling. Leave the car in Auto mode and it will do all the adjustments for you. 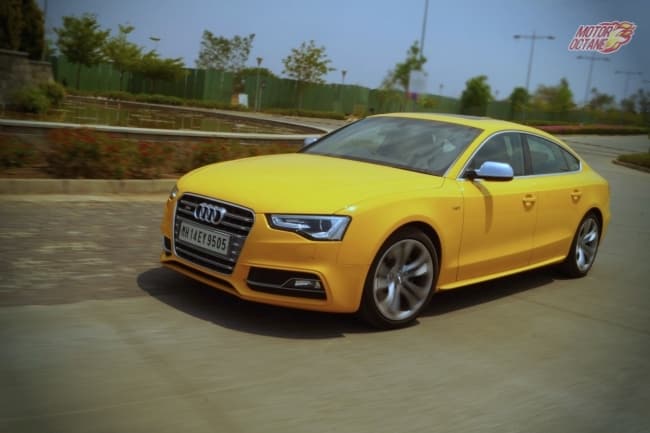 In the Efficiency mode, the steering wheel weights up a lot like a race car. The power used by the hydraulics is reduced, gears shift at much lower rpm and even the throttle and gear shift response slows down. I did drive it in this mode for a while and I was enjoying the heavy steering wheel, until I left the need for a quick downshift on a twisty road. Shift into Dynamic and from that moment it is joy driving this machine. All the bends were eaten without any hiccups and the way this thing moves and shifts weight. I realised that the buyer of this car will not get the time to play around with the gadgets. It is fast and it is fun, and if race track isn’t your thing than this is the best one to pick. Now, the closing pointers: If you need something that has good performance, you will want it to get noticed too. The Audi S5 subtle catches your attention. With the price sticker hovering at about INR 70 lakhs (on-road), this makes a lot of sense for those who like to drive themselves. For one, you can’t be missed and second when you get behind the wheel.