Kawasaki has earned a name amongst superbike enthusiasts in a way which no other bike manufacturer has. With the sheer variety of models launched in India, it has captured the imagination of bikers very well. Right from the entry level Z250 to the Ninja ZX-14, the Kawasaki range is full of nakeds, street bikes and tourers. Kawasaki has recently launched the Versys 650 and we spent a few days with this tourer to learn more about it.

The Kawasaki Versys was earlier available only in a 1000cc avatar and now the company has brought in the 650cc version. The Versys 1000 has been a very capable touring machine and now in a 650cc version it is slightly affordable too. 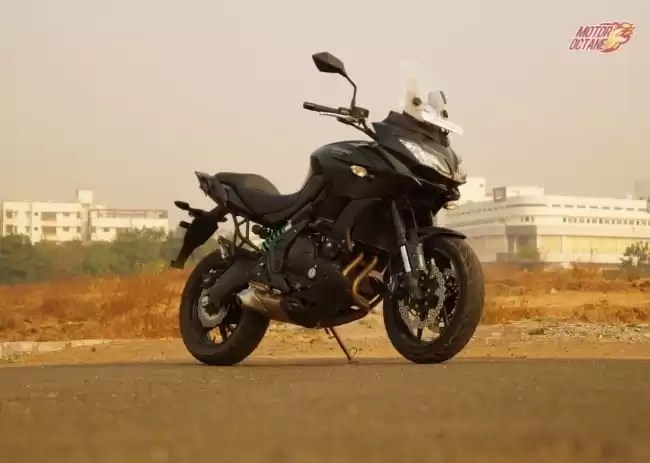 The Versys 650 looks identical to its bigger sibling. Large proportions and a tall stance remain unchanged. The front fairing hosts sleek looking twin headlamps and on top has an adjustable windshield. The chiseled fairing gives the bike a mean yet sophisticated look. The turn indicators are mounted below the headlamps on either side. 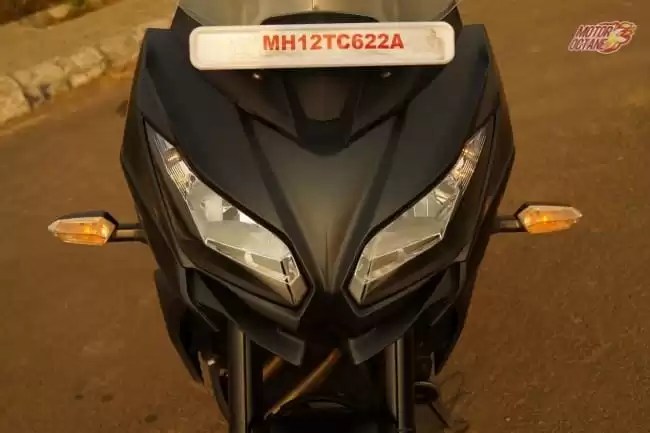 The well contoured tank blends well with overall design. The step seat goes well with the sharply raked tail. It has grab handles on either side which also have hidden sockets to mount panniers, which are available as accessories. The grab handles also have lugs for bungie cords for tying luggage . The taillamp is an LED one. The short exhaust pipe is neatly tucked below the front footrest. The Versys looks good from all angles. 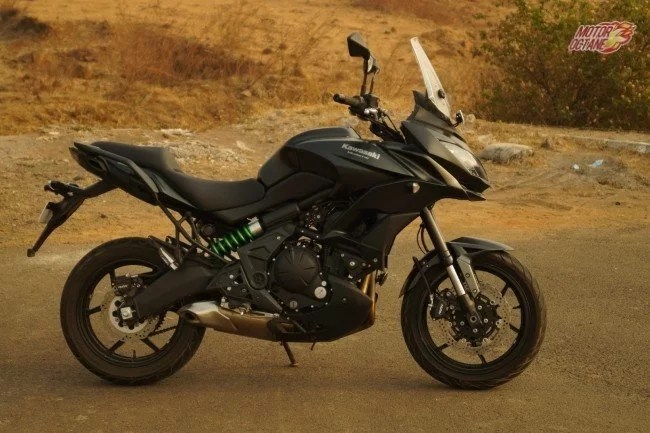 The instrument cluster is quite basic, similar to its other siblings. It has an analogue tachometer and a digital speedo, tripmeter and fuel gauge. I sorely missed a gear indicator here. The switchgear is also standard but has good build. Ditto with the handlebar grips, levers and bar ends. There is underseat storage also available, though its limited to placing the the tool box and maybe the bike documents. There are two helmet holders on either side which are very helpful as you can lock the helmets while the bike is parked.

The Versys 650 becomes a centre of attraction in traffic due to its tall stance. It is currently available only in Metallic Black colour. We would’ve preferred more colour options and we think Kawasaki may introduce them at a later stage.

The Versys 650 is fitted with a 649cc parallel twin, liquid cooled engine with fuel injection. It makes 67.5bhp of power at 8500rpm and 64Nm of torque at 7000rpm. This is the same engine that powers the Ninja 650 and ER6n, however the Versys steps down a bit on power and in turn offers a wider spread of torque to make it more rideable in different conditions. The engine also has an intelligent ECU thats adjusts the idling as per atmospheric conditions. 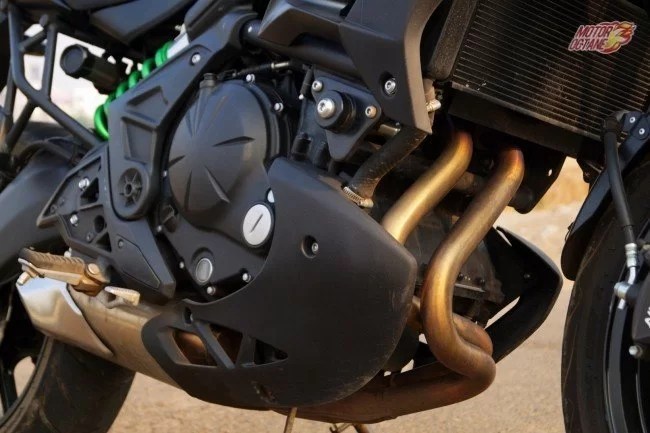 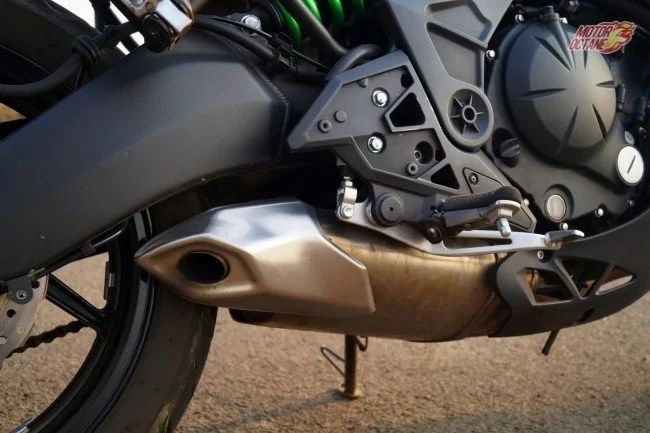 The engine fires up with a refined exhaust note and settles to a soft idle. It feels extremely smooth and there is seamless delivery of power. Don’t expect it to shoot off crazily like some other bikes in this category but the Versys never feels out of breath and can reach triple digits in under 5 seconds. A heavy wringing of the throttle can see the front wheel in the air, even in second gear. This despite the bike weighing 216 kgs, which is not exactly light. The even spread of torque makes it easy to ride even in the city and at slower speeds. The only glitch I had was with the gearbox, which feels clunky. The gears slot well but its just that the shifts do have a bit of a rustic feel to it. 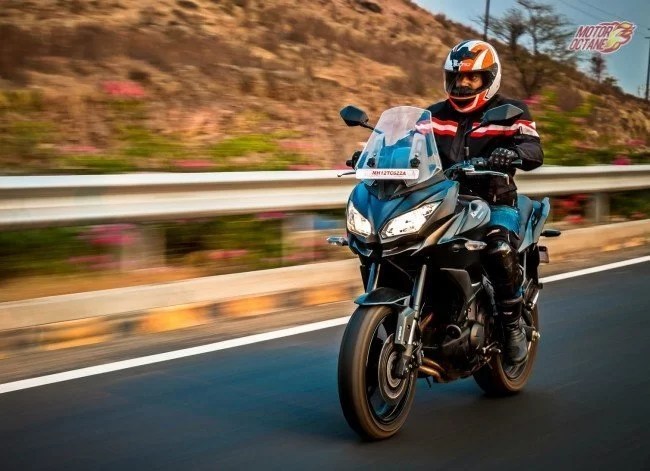 The Versys 650 is an effortless cruiser. The refined mill makes it even more of a pleasure to keep riding for hours together. A taller sixth gear would have been preferred as the engine would then spin a little lesser at speeds beyond 120 km/h, however it is not something that will bother.

The Versys is a tall bike and those with medium height need to nearly jump to straddle the bike. Short riders will find it difficult. Once you are on the bike it feels extremely comfortable. The seats are perfect having a wide base with great cushioning. The handlebar position is set high and its width makes for a perfect riding position. The footpegs have an ideal placement too, neither set too forward or back. Not only the rider but the pillion too will find it extremely comfortable. Now, this is a rare affair and pleasing your better half in being comfortable, riding pillion, is a tough job for many. The only challenge is while mounting the bike, where the pillion has to step on the footrest to be able to mount the rear seat. 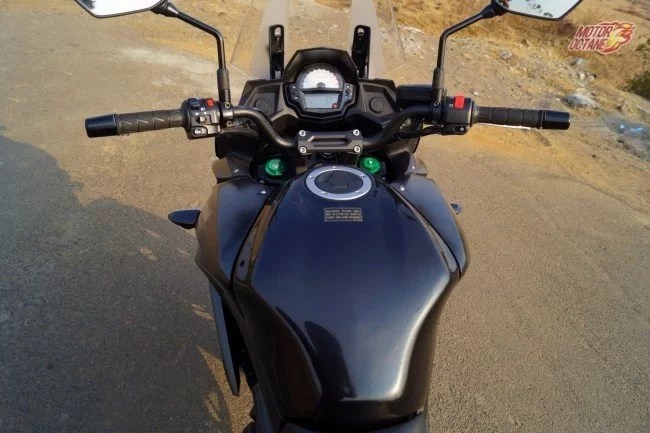 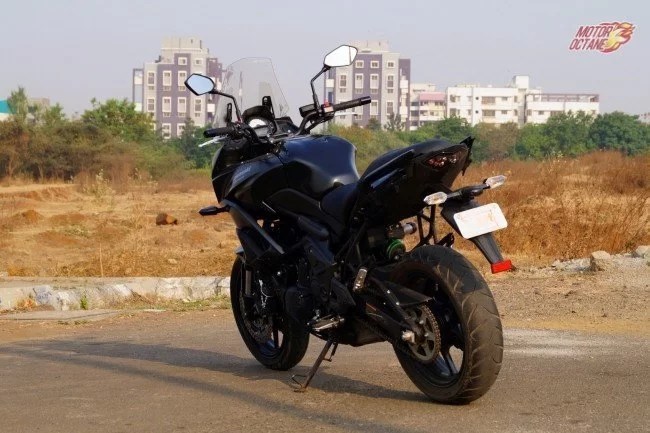 The ride is where the Versys 650 excels. A fantastic suspension system aids this. The ride is pliant and the bike remains firmly planted on the road. The long-travel 41mm Showa front forks do their job very well. They can be adjusted for pre-load and damping. The rear suspension is a monoshock which also has preload adjustments by simply turning a knob which is easily accessible. The Versys 650 is a sort of dual sport machine and can handle a little bit of off-roading but the tyre setup preferably calls for tarmac riding. For off roading, a different set of tyres is recommended.  The 170mm ground clearance and suspension pose no challenge in otherwise taking it off the road. 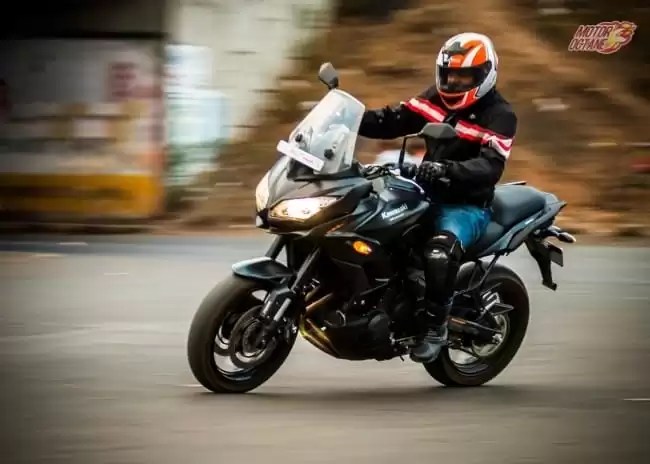 The Versys handles brilliantly and despite the tall proportions it takes bends with ease, almost like a sports bike. Sudden direction changes also are handled with aplomb. To aid this, the braking is excellent too. The ABS works flawlessly and has a good bite. As mentioned earlier, its easy to ride this bike in traffic conditions without much effort.

The Versys 650 returned a mileage of 18km/l in city riding with traffic. On the highway it returned 22km/l, that too at speeds mostly beyond 120km/h. 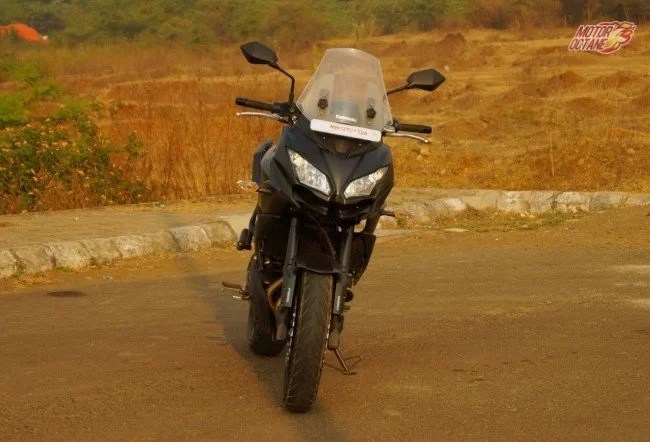 If you are looking for a long distance tourer which can be ridden for daily commutes as well as weekend getaways and is slightly affordable, your search ends here. Believe me, the Versys 650 is one of the most well-rounded motorcycles I have ridden. It is versatile and hence gets its name from this word. We found the Versys 650 very good value for money as well. It is well equipped, good looking, has great ride and handling and a seamlessly performing engine. Frankly, this is one bike which we had a hard time letting go. 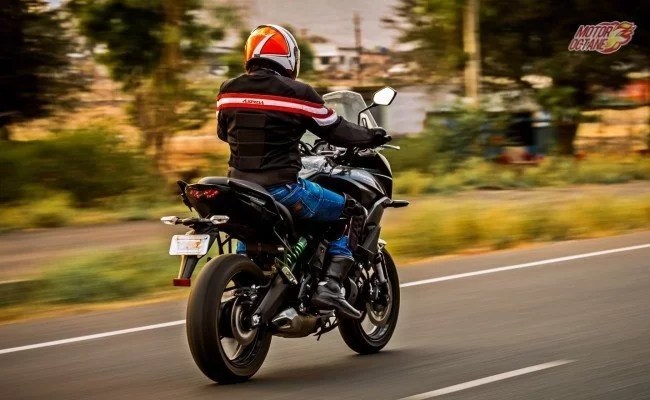